Thailand is part of the Indo-China peninsula, linking Myanmar, Laos and Cambodia to the north with Malaysia to the south. Formerly it was known as Siam though that name was only used externally. The region has historically been fought over many times. Originally it was occupied by Mon, Khmer and Malay peoples, but the Tai, migrating from western China, moved in from the 11th century and eventually took over the present country. The detailed history is far too complex to give here. Siam transitioned from an absolute monarchy to a constitutional monarchy in 1932, and formally changed the name to Thailand. Nevertheless the monarch has much more power than in other constitutional monarchies and any criticism of the King is a criminal offence. Thailand is justifiably proud of being the only country of the region never to be colonized. 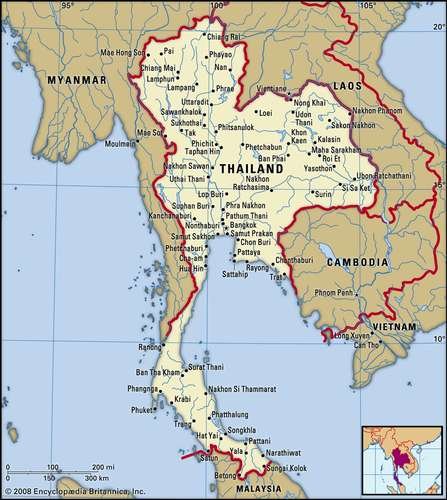 Map of Thailand and the peninsula, courtesy Britannica.

Politically Thailand has oscillated between periods of democracy and spells of military rule - at the time of writing (2020) it is in the latter state. Extraordinarily, these transitions mostly take place without bloodshed. Of course there are protests. Since the economy always does better under a civilian government one might think that the generals might take the hint, but that would be ascribing too much intelligence to the military.

The population of Thailand is mostly (95%) Buddhist, and they do not circumcise. It is not prohibited, it is just not the custom. However, they do tend to wear their foreskins retracted, like the Japanese. From a young Thai man: “ …they tried to train their skin to stay back behind the head. When I saw some of my friends showering together, most of them had their skin retracted all the time. This issue might never been discussed among friends, but it seems that most … try to keep the skin retracted.” Another Thai man told me that at age 10 he had simply pulled his foreskin back and it has stayed that way thereafter.

Around 4% of the population is Muslim. They are most numerous in the south, but are found everywhere. The Muslims, as in Malaysia and Indonesia, circumcise their boys between age 5 and 7. Hence among Thais circumcision is regarded as a Muslim thing. The remaining 1% are Christians (almost all Catholic), predominantly in the central-east area where French missionaries came in from Cambodia and Laos. Churches typically have at least one Sunday service in English to cater for foreign residents and tourists. Hindus make up a tiny fraction of the population but Hindu priests play an important part in Royal ceremonies. The Jewish population is even smaller but, amusingly, they maintain synagogues in popular tourist spots where there is no Jewish population to cater for Israeli tourists.

Thailand has a very good medical system, rated 6th in the world and #1 in Asia. It also has the highest incidence of AIDS in Asia - not surprising given its reputation as a destination for sex tourism. (Though it is not remotely comparable to the problem in southern Africa). This has led to a recent call for the introduction of neonatal circumcision. In 2018 this was published in a paper "Physicians’ and nurses’ thoughts and concerns about introducing neonatal male circumcision in Thailand: a qualitative study" [1]. This was met with some horror as you can see by following the links (the paper is open access). In Thailand most babies are born in public hospitals and, whether they are Buddhist or Muslim they are not circumcised in the maternity ward. The public hospital system simply does not offer neonatal circumcision. Babies born to farang (Western) parents are typically born in the private hospitals where neonatal circumcision is routinely available. (In the past it was almost automatic but the influx of Russians and Germans has probably changed that).


One nurse said "It’s good. I let my child be circumcised. It is easy to keep the penis clean. There won’t be phimosis. It will decrease phimosis and urinary tract infection… so I got my child circumcised.

Some understood that NMC could prevent transmission of sexually transmitted diseases including human papilloma virus which causes cervical cancer. As a nurse said:
"It might be an option for the general population in the long run for prevention of sexually transmitted diseases, which is a problem at present, and it should also be seen as a way to prevent cervical cancer."

A nurse stated:
(I’m) concerned about bleeding, infection and care after surgery. Could it really prevent the disease as they said? Could it prevent cancer and sexually transmitted diseases? Is that true? “I am concerned about the experience and skill of doctors … performing the surgery. Nowadays, there are many newly graduated doctors with a very high turnover rate. I don’t think they have enough experience. People will not have confidence. If something bad happens, they will sue us.”

A nurse stated that “Don’t agree, I don’t agree. I feel bad for the infants. It causes them pain and may create long-term bad memories, which we might not know about. It also violates the child’s rights. We don’t know what they would feel in the future”

The consensus was that there was a need for a pilot project - hard to understand from the medical point of view but totally comprehensible politically. It will be very interesting to see what happens.

I was born in 1986 of half Thai and half Chinese descent. In Thailand, the subject of sex and related topics are not usually discussed in the family. Mostly, teenagers learn about sex from school (it is also limited). The internet and friends are the sources that most teenagers learn from about sex. The first time I learned about circumcision was at the age of 12 or 13. One day, a few friends and I played around together, and we ended up stripping clothes from one of the boys. His penis looked different from mine and my other friends'. It turned out that he was circumcised. We were curious about it and asked him about his circumcision. He said that he was circumcised at birth.

Throughout the years I was uncut, I had difficulties in keeping my penis clean and sometimes I had itches on my foreskin. Around the age of 20, I sought more information about circumcision and its benefits and I found that most American men were circumcised. Not long time after learning this, I decided to undergo the operation before I went to study in the States. While I was in the States, one clear advantage of circumcision was that my penis did not look different from other guys in the gym.

Adult circumcision in Thailand is relatively cheap. In public hospitals, the cost of the operation is around 100-150 USD. The cost in private clinics and private hospitals is higher (about 200-350 USD). However, it is hard to convince doctors at the public hospitals to circumcise without any medical reasons. For adult circumcision, the circumcision style may not always be the high-tight style. Most doctors perform the loose style. If you want to have a circumcision in Thailand, you’d better make sure that you discuss the style that you want before having the operation. For my case, I did not discuss about the style with the doctor. The result turned out that I have high-loose style. In my case, there is some skin bunching behind the rim in the flaccid state, but the skin is very tight during erection. That isn't really a loose style - Ed.

During my three years in the States, I made friends with many Thai students. We were chatting about chicks, sex and getting married. One of my friends talked about marrying Muslim women and we ended up talking about circumcision. During the conversation, I found that some of my Thai friends had been circumcised too (all of them were circumcised at birth). I noticed that all of my friends who were circumcised had parents who were either doctors and nurses or had spent time in the States (either working or studying).

From my experience of being both uncut and cut, I am proud to say that I made the right decision to get circumcised. Actually, I wish that I had been circumcised at birth. Circumcision provides me with a number of benefits. I no longer have problems with my foreskin. The itch and smell are all gone. I last longer when I have sex. My penis glans is much larger. The climax is much more intense. Women also like sucking and playing with my cut penis. There is just only one con that I could think of for being circumcised. That is the requirement to use lube for masturbation. Anyway, it did not take long to adjust the way I masturbated. Without a doubt, if I have a son, I will ask the doctor to circumcise him at birth.

If you wonder about the penis size of Thai men, I can share some information with you. As far as I know, most of us have a penis with the average size of 5.5-6.5 inch long and 4.8-5.5 inch in girth. My penis is about 6.1 inch long and 5 inches for girth. One more thing to share is about pubic hair. Most Thai people (both men and women) do not usually shave or trim their pubes. But I trim my pubes because I sweat a lot during the day. Keeping my hair short helps me with the sweat.

Thanks to Wikipedia for statistics and Britannica for the map.