Belgium is a maritime nation on the coast of the North Sea, sandwiched between the Netherlands to the north and France to the south. On the east it borders Germany and Luxembourg. It has only existed in (more or less) its current since 1830. The north of the country - Flanders - speaks Flemish and the south part - Wallonia - speaks French. There is also a tiny German-speaking area. 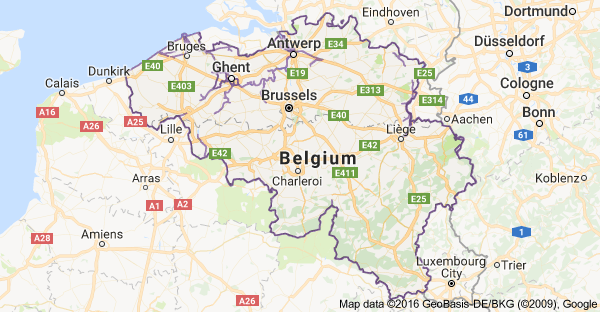 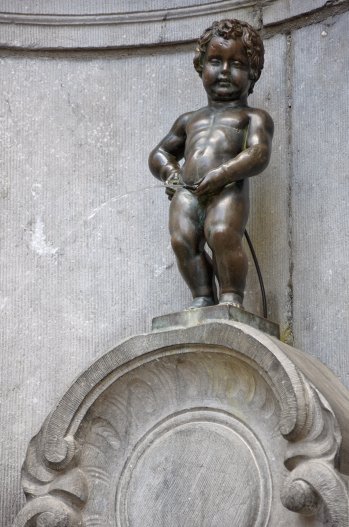 Although in its present form Belgium is a fairly new country it has a very rich cultural history, since Flanders was a very wealthy maritime trading nation. The Flemish old master painters are legendary, and Flanders was also a centre of musical instrument production. The most enduring image is probably the Manneken Pis fountain, made in 1619 by Brussels sculptor Hieronimus Duquesnoy to replace a stone version installed in 1388. The original is now in a museum, what you see now is a replica made in 1965. All the tales told about it are probably just that, it was surely just a bit of whimsy. Before water got piped to houses it was an essential part of the city's water supply. It is quite amusing to think of the housewives and kitchen maids lining up to fill their buckets from a peeing boy. No good looking to see if he is circumcised or not - where his penis should be is just an ugly metal pipe.

Historically in Belgium circumcision was just a Jewish practice. There was a substantial Jewish population, and even though more than 20,000 Belgian Jews died in Hitler's holocaust, Belgium still hosts one of Europe's largest Jewish communities, many of whom still speak Yiddish. Because of its location, Belgium was a battle ground in both World Wars (it gained its German-speaking region in WWI reparations). King Leopold III was widely seen as sympathising with Germany in WWII, and was forced to abdicate after the war. Now the monarchy is popular, but essentially powerless.

More recently Belgium has gained a substantial Muslim population, mostly from Morocco and Turkey, and largely based in Brussels. They account for about 6% of the population. The ethnic Flemish and Walloon population is mostly Catholic, but in name only. Actual religious observance is very low. What is their attitude to circumcision? In neighbouring Holland (Netherlands) the medical profession is almost fanatically opposed to circumcision, and will not even consider the benefits, but this attitude does not seem to have carried over to Belgium. 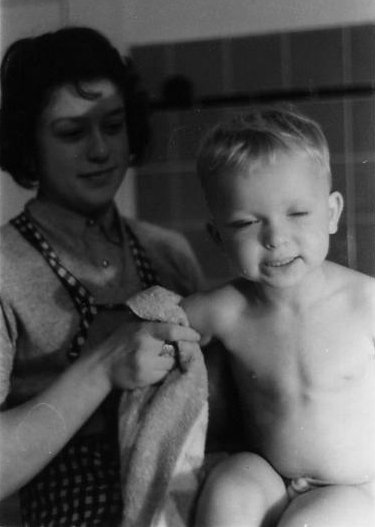 This charming picture of mother and toddler was taken in the 1950s, and shows that infant circumcision was certainly happening in Belgium back then. The boy in the picture, Robert B., sent me the photo about 10 years ago and was still very happy that his parents had chosen to have him circumcised. It seems that circumcision in Belgium was simply not a an issue - it was available if wanted or needed. Then, in 2013, medical student Dana Van Gassen wrote a masters thesis on the prevalence of, and reasons for, paediatric circumcision[1]. She commented that, apart from a popular magazine article in the previous year, it appeared to be the first ever study of circumcision in Belgium.

Van Gassen looked at two sources, medical records from the hospital attached to the Free University, Brussels, and health insurance statistics for the country as a whole. The former records were detailed, and available from 1994 to 2012, the latter had little detail, and were only available for 2002 to 2011, but covered the entire population. Both sets of figures showed that circumcision was increasing substantially in popularity, and that currently more than 30% of boys are circumcised by age 16.

If we look at the detailed records from the hospital we can see that the number of circumcisions performed was fairly constant up until 2000, declined between 2001 and 2005, then rose dramatically (see the left-hand graph, below). But the number of boys in the hospital's catchment was also increasing at much the same rate.

Van Gassen did not look at adult circumcisions. She divided boys into 3 age groups, 0-4, 5-9 and 10-15 years, and the increase was almost entirely in the youngest group. It is possibly unfortunate that this group covers such a wide age range that we cannot know which were true neonatal cuts.

Another interesting feature discovered by Van Gassen was a change in the reasons for performing circumcisions. Acute medical conditions - balaniitis, UTIs, paraphiimosis etc, did not change, but they only ever accounted for a tiny percentage of circumcisions. Until 2000, the major reason for circumcision was phimosis, accounting for the vast majority of operations. That had more than halved by 2002 and remained steady from then on. But the number done just for 'parental request' skyrocketed, from 50 in 1994 to 236 in 2012. Some of these are doubtless religious - Brussels has a large Muslim population. But the nationwide figures also show a huge hike in circumcision rates, and Muslime are scarce outside the capital. Why the decline in phimosis? Van Gassen puts it down to the introduction of topical steroids to treat phimosis in 2000. She may have a point, but I'm inclined to think that many parents were just using phimosis as an excuse - they wanted their boy circumcised. So it was simplest just to ask straight out.

Coincidentally at about the same time a paper came out from the University of Ghent [2] which took a very negative view of circumcision. Its methodology was shonky and statistical significance mostly non-existent. The only reason I mention it is that 29% of the sample were circumcised. Their sample was overwhelmingly caucasian - if you exclude non-caucasians the figure is still 28%. These were all adults. So circumcision really is popular in Belgium.

So, in conclusion, Belgium may even overtake Germany as the most-circumcising country in Western Europe. And best of all, it seems that if you want your son circumcised you just have to ask - it will be done and the insurance will pay. How very civilised.

If you have more information about circumcision in Belgium please contact us.

1. Dana Van Gassen, Trends in pediatric circumcision in Belgium and the Brussels University Hospital from 1994 to 2012. Master of Medicine thesis, Free University of Brussels, 2013. You can read it here.

2. Guy A. Bronselaer and others, 2013. Male circumcision decreases penile sensitivity as measured in a large cohort. BJU International 111, 820-827 Open access - read it here.


The svg image of the Greater Coat of Arms of Belgium was created by Sodacan with elements by Ssolbergj and Katepanomegas. It is licensed under GNU Creative Commons - you may copy, use and modify it provided that this acknowledgement is given.