The Republic of Indonesia is an archipelago containg over 17,000 islands, of which Java is the most populous. It is the world's fourth largest country by population, after China, India and the USA. It also has the world's largest Muslim population, narrowly beating Pakistan. Other religions are Christianity, Hinduism and Buddhism. All are officially recognized but Islam (Sunni) dominates by weight of numbers. However, this does vary hugely between islands, with Bali being mainly Hindu and Irian Jaya Christian and animist. The capital city is Jakarta (formerly Batavia), in Java, but plans are proposed to build a new capital in Borneo (Kalimantan). 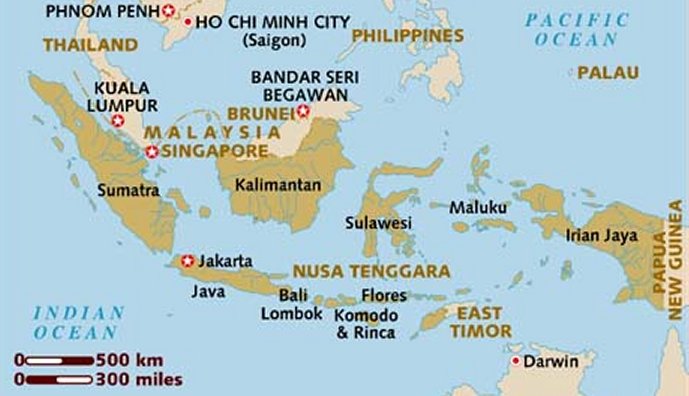 Like other countries in the region, Indonesia's boundary is totally artificial, resulting from past colonial ventures. Indonesia was once the Dutch East Indies, in a region where four colonial powers were vying to acquire territory. Thus several islands are divided along colonial lines. Borneo is split into Kalimantan (Indonesia, formerly Dutch) and Brunei (Malaysia, formerly British), Timor is split into West Timor, Indonesian and East Timor (Timot Leste) formerly Portuguese, and the giant island of New Guinea is split into Papua New Guinea (formerly half German, half English, now independent) and Irian Jaya (Formerly Dutch, now Indonesian but not happy about it).

The Hindu population of Bali do not circumcise. Any interference with the foreskin is frowned upon, so phimosis is very common. As a result penile cancer is the most common cancer among men, and cervical cancer is common among women. Boon et al., 1989

The Muslim population circumcise their boys typically between age 5 and 7. It is a great ceremony, as elsewhere in the Islamic world. The boy dresses up in special clothes and is given presents and treats, which doubtless help to ease the pain. The operation itself is generally performed by medical professionals.

A young Javanese man, 'ML' aged 19, with a very well performed circumcision. His pubic hair is shaved, of course, because he is a Muslim.

The Melanesian population of Irian Jaya also mostly circumcise, either with a full circumcision or a dorsal slit. Their practices are much the same as the rest of the New Guinea population, so see our PNG page.

From an Indonesian correspondent, AWI

In Indonesia, circumcision is very common. Indonesia is the biggest Muslim country in the world, and it is a requirement that every Muslim male should be circumcised. There are plenty of methods available, from traditional circumcision to very latest methods of circumcision like the ZSR Stapler circumcision device, or classic clamps like Mogen, Gomco, and Winkelmann clamp.

Most Indonesians perform circumcision at the age before akhil baligh (the term for puberty in Islam) which is usually 7 to 10 years old, meaning that they will be elementary school students. But not infrequently boys are circumcised when they are babies, some are done on the 7th day some are 3 months old like me, but some are only circumcised when they are over 10 years old which is usually the age of junior high school.

I don't always know why these children are circumcised at an age which is considered by the majority of Indonesians to be "old", but in some cases that I have known it was not by choice. For some boys it is a consequence of financial issues that have to prioritize needs such as clothing, food, and housing. Only once the primary needs have been met can circumcision, which is a secondary need, be afforded. In some other cases, the boy was afraid to be circumcised because he saw other boys crying in pain during the circumcision process and ran away from the place of circumcision.

To understand the financial challenges we need to know the price of circumcision in Indonesia. According to my observations, the cheapest smartklamp (clamp) circumcision in South Tangerang with a regional minimum wage of IDR 4.2 million / month (EUR 277.06 or USD 283.21) could cost around IDR 1.5 million. At the exchange rate at the time of writing (July 30, 2022) $1US = IDR 14,815,40. Then the cost of circumcision in South Tangerang is around USD 101.15 or around EUR 98.95. The price includes the necessary medicines, 1 time doctor's check and one pair of special underwear for the recently-circumcised that protect the circumcised penis from accidental impact.

Underpants to wear post- circumcision. They should be marketed more widely!

It looks cheap but in reality there are many boys from families who cannot afford to pay for their son's circumcision. This is where a CSR (Corporate Social Responsibility) program comes in and saves the day for the underprivileged or poor Indonesian people. Sometimes companies carry out mass circumcision programs targeting boys from underprivileged families near the company or in other areas that, based on surveys, need humanitarian assistance.


Below, a mass circumcision event.

Usually this is combined with other social services such as building a mosque, revitalizing facilities and infrastructure in an area and free medical treatment including free mass circumcision. However, sometimes mass circumcision is also held to commemorate national days such as children's day, institutional birthdays, Islamic holidays, and even political campaigns held before the legislative, executive, and other levels of government elections.

Now, let's look at traditional circumcision in Indonesia. Well, we know that Indonesia has a very diverse culture. Islam was adopted by a region which previously had Hindu and Buddhist traditions. As a result many circumcision ceremonies differ from one region to another.

In the past traditional circumcision did not use anaesthesia and in some parts of Indonesia that still continues to the present day in rural areas. In my hometown in West Java there is a house with typical West Java architecture. In that house lived a man aged 60 - 70 years or more who was famous in several neighbouring villages as a traditional circumcision expert. He usually accepted requests for circumcision during the school holiday season, but sometimes there were also those who asked for circumcision outside that season. I can remember when his house was crowded with people who took their boys to be circumcised by him. He did this circumcision alone. He usually prepared a few pisau lipat (in Bahasa Indonesia pocket knife or penknife), bandages, homemade wound medicine, cotton, a bottle of alcohol for sterilization, and also a few ice cubes.

The process is fairly simple and I think I could also manage it for my 5 year old cousins who are still uncircumcised (haha, just kidding ). First, the father of the boy to be circumcised will sit on a wooden chair that has been provided in front of the circumcision expert's house. The children who will be circumcised take off their pants and underwear and change into sarongs. Then the child will sit on his father's lap with the sarong flipped up to cover his face, and open his legs so that the circumciser has free access. Then the circumciser would start reading prayers and praises for the Prophet Muhammad and Allah سبحانه و تعالى while cleaning the penis area with alcohol on cotton-wool.

Then the circumciser opens the child's foreskin with a small metal rod with a blunt tip to remove the sticking to the glans caused by smegma. He then proceeds to pull the foreskin of the child and clean it with alcohol. The next step is to measure the length of the foreskin so as to know where to cut it. Then the foreskin is pulled forward and clamped with tongs (which at first glance look like chopsticks made of bamboo or wood tied at one end). Ice cubes are put on the foreskin and shaft of the child's penis for a few moments then the clamped foreskin is severed with a pocket knife. Blood will drip immediately after the cut and the child will be more rebellious than before. The next step is to open the clamp and push back the skin so that it does not cover the glans penis, then to bandage up the wound with the home-made medicine.

This process took about 5 minutes and usually boys who were circumcised would cry and rebel because of the pain. I remember he once circumcised 15 children with the 3 penknives he had. I once asked "why provide so many knives?" he replied "sometimes the knife after being used more than 5 times will feel dull, instead of sharpening in front of the child who will be circumcised, it is better to provide several knives according to the number of patients". Sadly, he died when the covid-19 pandemic was rampant in Indonesia, he died while praying. During his life, he never received a complaint such as an insufficiently cut foreskin or an accident such as a cut penis.

Maybe some readers will wonder, why did he do everything himself? Well this is because he had lost his only child. I heard from a neighbour that his only son died in a motorcycle accident and that's why he didn't have any help.

But there are also those who combine traditional Indonesian culture with modern methods. Ever since the Dutch colonial era, some cases of circumcision were performed under anaesthesia so that the boy would not feel sick. Usually, the ones who could get access to this were the noble and royal families who cooperated with the Dutch colonial government at that time.

But nowadays, most parents choose modern circumcision methods rather than traditional circumcisions which sometimes can be very risky. A few years ago a boy from somewhere in Java had half of his penis cut off during circumcision.

More recently there was a child who experienced an unpleasant incident while attending a mass circumcision in Sumatra. This boy has phimosis but the medical personnel who performed the circumcision seemed to have miscalculated how much of the foreskin should be cut, this resulted in the boy's glans penis being closed again and, as readers know, the child will need revision circumcision.

Indonesian culture still has mystical things that are believed by most people. These can involve circumcision. This happened a few years ago when a boy winced in pain from his penis after he peed in an old tree near the area where he lived, When examined by the boy's parents both were surprised that their son had been "circumcised" by spirits or a genie. People living around the child's house were immediately shocked and the local press reported on the incident.

The boy 'circumcised by the genie in a magic tree' - in reality a case of paraphimosis.

Such mystical ideas are still very much part of Indonesian culture. Whereas what actually happened was that the boy had paraphimosis. As the reader knows that can be dangerous for the boy if no action is taken to rectify it. Once the foreskin has been corrected to its proper position, then circumcision can be done to avoid similar incidents.

These clinics also promote that patients can go straight to their normal activities. This is important, remembering that most of the patients are boys who, as we know, are very active. In addition, adult patients are also guaranteed that they can carry out activities such as going to the office, meetings, and other light activities freely after circumcision.

I think that's all that I can share with Circlist readers from all over the world. Thank you for reading my story and hopefully, we can meet here in Indonesia.

See you in the next sharing and Selamat tinggal!

A major circumcision instrument that has come out of Indonesia, and has yet to be marketed widely elsewhere,is the Mahdian Klem, or Klamp. For a full report, with images, see our Instruments and Techniques page. (Yes, they do spell Klamp with a K in English).

Thanks to Wikipedia for geographhical data and Lonely Planet for the map. The cave photograph is by Chris Howes, courtest of Gunnung Mulu National Park.